1. Anne Lamott, bird by bird: Some Instructions on Writing and Life, 1994, Anchor Books

If you prefer more than just a writer’s manual—perhaps you’d like insight into a published author’s world—Lamott’s book can give you that. She blends memoir with writing advice. Are you a perfectionist? Lamott dedicates a chapter to it. Do you get writer’s block? Lamott does too, and talks about how to deal with it—acceptance being the first step.

One of the best American authors of horror, suspense, science fiction, and fantasy, King’s memoir about his writing life doesn’t disappoint. How does he come up with those crazy characters and storylines?! On Writing is a great way to get inside King’s creative mind! He says, “I am approaching the heart of this book with two theses, both simple. The first is that good writing consists of mastering the fundamentals (vocabulary, grammar, the elements of style) … The second is that while it is impossible to make a competent writer out of a bad writer, and while it is equally impossible to make a great writer out of a good one, it is possible, with lots of hard work, dedication, and timely help, to make a good writer out of a merely competent one.”

Klinkenborg’s book is exactly that—several short sentences about writing. A quick and easy read, Klinkenborg gives you writing advice through clear and concise sentences. Adding to writers’ “received” knowledge—which he describes as “untested, untried, repeated out of habit”—he offers this book as a starting point for writers to experiment and find their voices.

If you need help with punctuation, Lukeman’s guide is for you! She describes punctuation in simple, driving terms, such as the period as a stop sign, the comma as a speed bump, and the semicolon as a bridge. Lukeman not only provides writing exercises within the context of your own work, but also offers a punctuation horoscope in which she explains what over usage of a particular punctuation says about who you are! According to Lukeman, if you overuse the semicolon, you’re “more likely to write in flowery, ornate prose, and the writing is likely to be overly intricate.”

Do you have “The Seventh Sense”? Truss describes it as being “like the little boy in The Sixth Sense who can see dead people, except that [you] can see dead punctuation.” At least it is a better description than The Punctuation Nazi. Truss’ book talks about punctuation that you might already know, mainly to show you what people don’t know. You may know that “[when] the possessor is plural, but does not end in an ‘s’, the apostrophe similarly precedes the ‘s’” as in “The children’s playground. But when the possessor is a regular plural, the apostrophe follows the ‘s’” as in “The boys’ hats (more than one boy).” 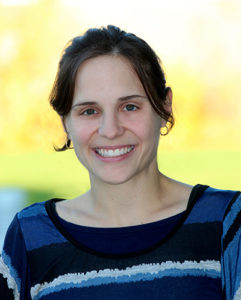 Vanessa Cozza is a Clinical Assistant Professor of English with emphasis in Rhetoric and Writing at Washington State University Tri-Cities. She has taught a variety of writing courses, including advanced rhetoric courses. Her research interests include visual rhetoric, community engagement, literacy practices of multilingual writers, race studies, and first-year writing. Vanessa also is a Fuse Associate Board Member, as well as Chair of Fuse’s Community Development Committee, which organizes the Fireside Chat Series. She loves any outdoor activities that involve mountains; her favorites include skiing, backpacking, camping, and hiking.